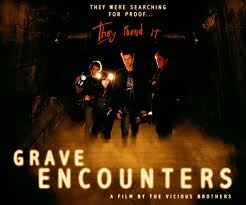 They were searching for proof... they found it.
Advertisement:

Grave Encounters is a 2011 indie found footage horror film directed by the Vicious Brothers. It documents the fate of the crew of a Ghost Adventures-type reality show which surveys haunted locations in the hopes of capturing ghostly activity on film. A prologue mentions that this particular episode, centering around an abandoned mental hospital in the Danvers County area, was to be the sixth, and the raw footage shows how the crew initially play up the spooky factor to increase the atmosphere. However, they soon find themselves in the middle of a nightmare as the sun goes down...

It has a sequel, Grave Encounters 2.