"Yo! What's up my beautiful weebs."
Introductory phrase. 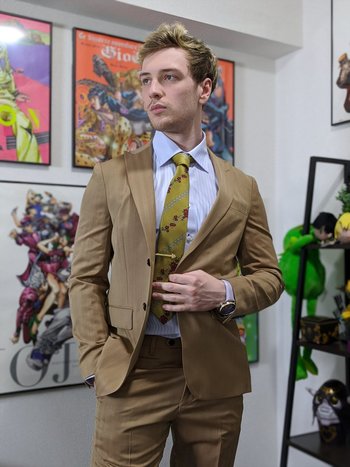 Connor Colquhoun, AKA CDawgVA is an Welsh internet personality and professional voice actor best known for his anime related content on Youtube.

Having started his channel on 2014, he would begin to gain popularity thanks to his voice impression videos, where he used an impression of Sebastian Michael from Black Butler, which had become notable in how similar it is to the character's actual voice actor, J. Michael Tatum.

Since then however, while most of his content is generally anime and manga related, he has since branched out of anime and manga a bit and has covered a wide variety of topics on his channel, particularly those related to Japanese pop culture and voice acting, especially since he moved to Japan in 2019, which he stated has given him the opportunity to cover things that he couldn't otherwise in his home country, such as host clubs, themed cafes, etc.

In 2020, he, alongside The Anime Man and Gigguk had started a podcast called Trash Taste, where they cover a wide variety of topics related to Japan and anime/manga in general.

Outside of his voice acting and Youtube career, he also directed the English audiobook dub for the yaoi manga, You Are My Princess under Bookwalker (a subsidiary of Kadokawa Corporation).

, he also has a Twitch page

where he does live-streams, as well as accounts on Instagram