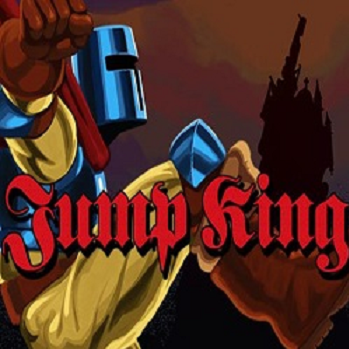 Jump King is a Platform Game, developed by Nexile and released for PC through Steam on May 3rd, 2019.

As its title suggests, it is simply about an unnamed King, who is absolutely gifted at jumping in spite of wearing full plate armor at all times. One day, he learns of a legend telling him of a Smoking Hot Babe languishing on top of a distant tower, and resolves to reach her the only way he knows how - by jumping a perilous path through narrow, vertical levels.

As you may have already guessed, the game is very short, but is also absolutely Nintendo Hard, being primarily designed to challenge speedrunners, much like Remnants Of Naezith or Getting Over It with Bennett Foddy.

Has nothing to do with Jump Force.