Video Game / The Journey Down 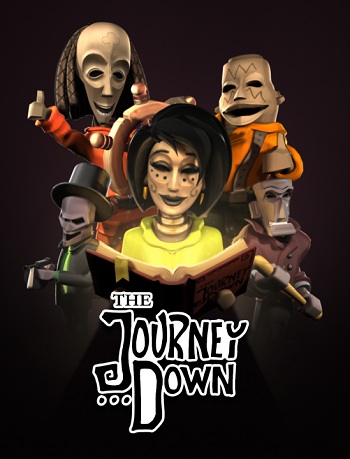 Journey Down is an Episodic Adventure Game by the Swedish indie developer SkyGoblin. Drawning inspiration from Film Noir and Afro-Caribbean culture, the game is best described as Grim Fandango meets the Western Pacific Ocean.

In a shady corner of Kingsport Bay, at the outskirts of St Armando, Bwana and his trusted sidekick Kito struggle to make ends meet at their run-down gas station. Little do they know that they are about to be thrown into a spine-tingling adventure that will take them far from home and right into a twisting plot of corruption and danger.

The plot catalyst is a young woman named Lina, assistant to a university professor who was investigating the Underland, a realm underneath the edge of the world. Her search has led her to look for a journal written by Kaonandodo, Bwana and Kito's foster father, and thereby to the Gas and Charter. Offering enough money for Bwana and Kito to pay off their debts to the electric company, she entices the duo to fly her down to the Underland.

But there's a problem. Kaonandodo's old seaplane is missing its engines. And a propeller. And a steering wheel. Cue Bwana going on a kleptomaniacal spree.

The first chapter was originally released for free in 2010 and then remade as a commercial title in 2012, with Chapter Two following in 2014. The third and final chapter was successfully funded

through Kickstarter and released in 2017.