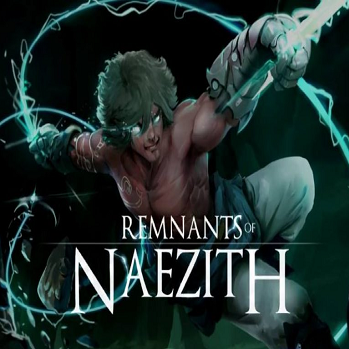 Remnants of Naezith is a Platform Game created by the Turkish developer Tolga Ay, and released for PC through Steam on February 5th, 2018.
Advertisement:

Its premise is that a mighty dragon named Naezith once held such immense power, that even his dead body still retained much of what he had in life, and the fragments became sought after by the humans to gather power from them. However, this upsets the dragon's soul, as he does not think anyone else deserves a claim on his former power. Thus, he seeks to nullify the power inside his fragments, but is unable to do that without a physical body.

Millennia after Naezith's death, an adventurer named Kayra tries to claim a fragment from a deep and remote cave, but instead falls in and would have died...if not for Naezith's soul entering his body. Now, Kayra is able to use two remnants of Naezith's claws as magical grappling hooks, and is given the location of what Naezith describes as limitless treasure. In exchange, Kayra must locate and purge every single fragment of Naezith's body along the way.