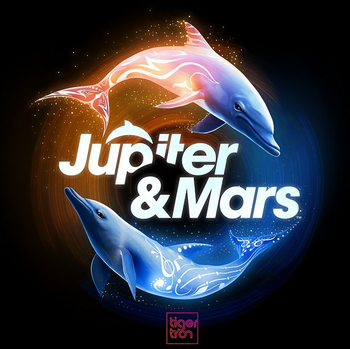 Jupiter & Mars is an Environmental Narrative Game with Metroidvania elements and in-built VR features, developed by Tigertron and released for Playstation 4 on April 22nd, 2019.
Advertisement:

It is set in a world where runaway global warming had occurred, and the humans, or "earthwalkers" as the ocean's denizens know them, no longer seem to exist, as the cities were flooded a long time ago. However, much of the humanity's abandoned technology persists, and is still disruptive due to the noise it makes. The player controls a dolphin named Jupiter, who is tasked by the Elders to shut them down, with the help of her mate Mars.