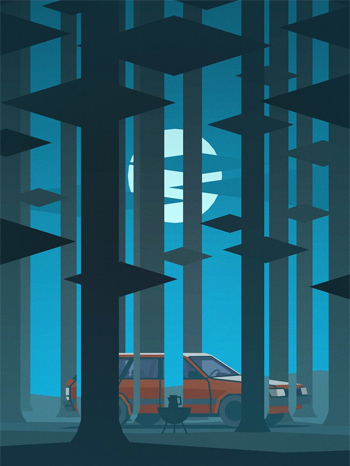 A Magic Realism mix of Adventure Game, Interactive Fiction, and Gamebook, Kentucky Route Zero is an episodic game developed by Cardboard Computer for PC. The game was first revealed in Kickstarter, and ran a successful campaign, followed by a trailer and the first act's release in January 7, 2013. The fifth and final Act released in January 28, 2020 alongside the TV Edition, a "definitive edition" containing all the acts and interludes, released also on consoles.

The game marks the intersection between the Adventure Game and Midwestern ghost stories. This ain't your traditional, freaky Ghost Story, mind — this one's more of a kind to make you sit back, and think about your life.

Conway is a humble deliveryman, working for an antique store delivering good-quality old stuff to those who want it. He's driving through the long Kentucky night with only his old, straw-hat-wearing dog for company. He's got a shipment to deliver to someplace called "5 Dogwood Drive." He doesn't know how to get there and it's not on any maps. Shannon is the child of a mining family. She repairs TVs in the back of a bait shop to make ends meet. Her family's been suffering financial troubles since the mine closed down. Joseph, the man at the gas station, says the way to Dogwood is to take the Zero — the one and only route that goes under Kentucky.

Has nothing to do with the Fried Chicken franchise.