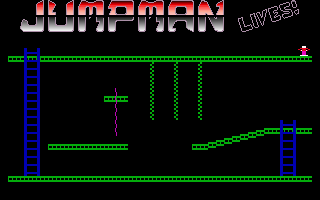 Jumpman Lives! is an unauthorized 1991 MS-DOS remake of Jumpman. The remake closely emulates the original in its graphical appearance of the multi-platform levels in which the player character walks, jumps, and climbs ladders and ropes to clear each level of bombs and avoid lethal hazards such as bullets. What it doesn't emulate is the nature of the hazards: in the original game, pretty much every level has its own gimmick, whereas most levels in this game are straightforward platforming.

Both the original and the remake share the same basic plot: a multi-level orbital science station needs to be cleared of bombs planted by a radical group. In the original game the station orbits the planet Jupiter, but in the remake it is in orbit around Saturn. Included in the remake are levels from the original game, a sequel entitled Jumpman Jr. (also published by Epyx) and some newly created ones. Other enhancements in the remake include a level editor (though good luck trying to figure it out), Sound Blaster support, and three skill levels.

Dave Sharpless designed and developed the game in co-operation with Apogee, the game's publisher. Scott Miller had obtained his address from a registration text file accompanying an earlier shareware game he had self-published. Miller contacted Sharpless, who agreed to create a Jumpman remake for Apogee. Sharpless chose to work with Apogee in part because it would handle all the marketing and distribution related tasks including preparing floppy disks with copies of the program, affixing labels to them and mailing them out to customers. Once Sharpless had created the level editor, it was used as the basis for constructing each of the game's 45 levels. He did most of the level design himself while Apogee's staff developed the game's introductory graphics, text screens (e.g. ordering information), and a few bonus levels. In accordance with Apogee's standard marketing practice at the time, the game was split into multiple episodes; the first episode was freely distributable as shareware and the remaining three episodes were commercial products which could be purchased directly from Apogee. Each episode consists of approximately 12 levels.

Jumpman Lives! was featured in PC Magazine's "PC MagNet News" column, where Chris Parker described it as a "clever merge of arcade action and intriguing designs."

Permission to create this remake had not been obtained from Epyx, the holder of the Jumpman copyright at the time. When Epyx learned of its existence, the company asked Apogee to discontinue it. Thus Jumpman Lives! was commercially available for only a few months following its release. Apogee no longer retains any control over or copyright in this title.