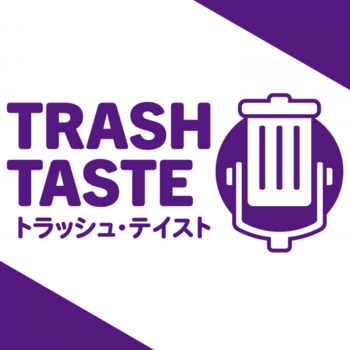 "The Worst Anime Podcast Has Arrived"
It's 2020. For the first half of the year, the world was laid low by the COVID-19 Pandemic. Like many countries affected by nationwide lockdowns, Japan was affected—and with it, its pop culture, anime and tourism industry. Nearly every public event related to these industries have been shuttered, cancelled and/or delayed. What hot topics, then, can Anime YouTube cover or talk about in these trying times?

Well, if you ask three particular anime YouTubers based in Japan... pretty much anything. And make it cool, funny and educational along the way as well.

note (a web-based arm of Bookwalker, itself a subsidiary of media conglomerate Kadokawa Corporation

Understandably, the show's topics usually launch from the three hosts' unabashed love of anime and Japanese popular culture in general. Nevertheless, despite the seeming simplicity of the show's premise (as well as the hosts' highly self-deprecating, sweary and full-on "degenerate" humor), the conversations can get pretty detailed, profound and full of Reality Subtext. It is helped that the hosts are pretty open about their personal experiences/years of living in Japan, particularly the significant disconnect between Japan's global popular brand and the realities/pressures of living as migrants in a still-quite exclusive society.

from the episodes is also available.