Series / By Any Means 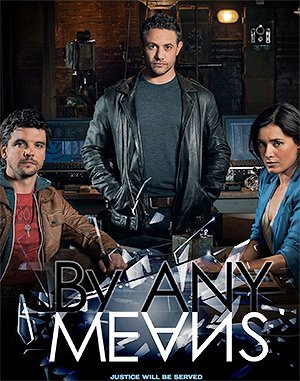 Note: This page describes the 2013 drama series, not the 2008 spiritual sequel to Long Way Round
Advertisement:

By Any Means is a British series (akin to Leverage or perhaps The Equalizer) in which a shadowy group of people, not officially connected to police, "rectify" miscarriages of (in)justice. The series features Warren Brown as Jack Quinn, the leader of the four-person group he is part of, which includes Andrew Lee Potts as the hacker "TomTom" Thomas Tomkins, Shelley Conn as Jessica Jones and Elliot Knight as Charlie, the newcomer. Also, an M-like figure in the background is Gina McKee as Friend on the Force and Reasonable Authority Figure Helen Barlow. Six episodes were aired and produced but the series was not renewed after the first season.