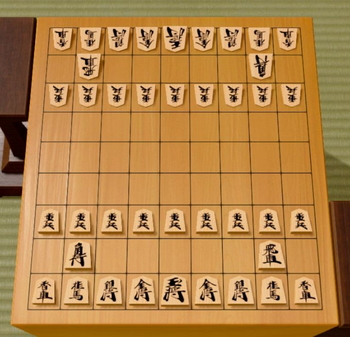 A shōgi board.
Shōgi is a strategy game of the same family as Xiangqi and Chess, and evolved in Japan. It is played on a 9x9 board.
Advertisement:

Unlike in other games of the Chaturanga family, players can return pieces they captured to the board. Promotable pieces can be promoted at any time in the opponent's home ranks. If a piece is captured, the promotion is undone.

Shogi is the most complex of the common chess variants; Feng Hsiung-Hsu, the initial creator of the series of computer systems that eventually became IBM's Deep Blue chess champion computer, has expressed an interest in creating a shogi system in the same vein should he ever get back into the computerized strategy gaming business.

This board game has examples of: