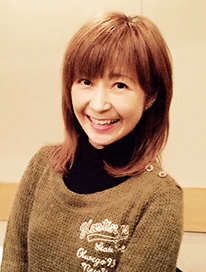 Satomi Kōrogi is a voice actress born on November 14, 1962. Her roles seem to be usually the Token Mini-Moe or the Ridiculously Cute Critter. Her vocal range can go so high that she is capable of convincingly voicing very young children, especially toddlers and babies, for which can be seen in her most famous role as Himawari Nohara of Crayon Shin-chan. However, her real speaking voice is evidently much, much deeper and almost unrecognizable compared to many of her character voices

. On the other side of the spectrum, she can also lower her voice in order to voice pre-teen and teen boys on occasion.

She's very short, as mentioned in one Excel Saga episode (where her walking off after her one line as Menchi is represented by the top of someone's head crossing the bottom of the screen).