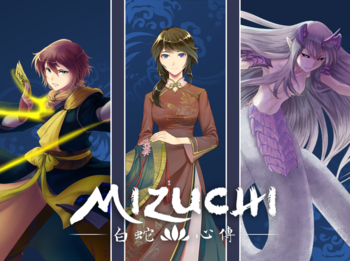 Mizuchi is a Yuri Genre Visual Novel created by Aikasa Collective and released for the PC on April 7, 2020.
Advertisement:

Linh is an impoverished village girl who finds herself accused of a crime she did not commit and sentenced to be judged by the local village snake god. When she's thrown into a snake pit, a white snake approaches her and offers to save her...for a price.

The white snake is revealed to be a shapeshifter named Ai, who decrees that Linh will serve as her companion in return for being rescued. Complicating matters is the arrival of Jinhai, a female monk who says that she wants to help set Linh free and also seems to have some history with Ai.

Though Linh desperately wants to go home to her family, she also can't help but feel drawn towards both Ai and Jinhai. The longer she stays with the two of them, the more Linh begins to question her understanding of life and what it means to be human.