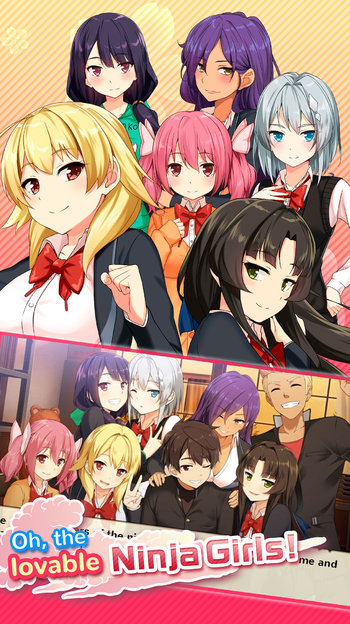 Kunoichi heaven
Moe! Ninja Girls is a visual novel, created by the NTT Solmare Corporation, which also created the Shall We Date? series. It is available on iOS, iPadOS, and Android (via the Google Play store), and PC (via Steam). The first installment was released on December 20, 2016, with the finale of its first Volume (consisting of 30 Seasons) released on December 6, 2020. The second Volume, The College Years (TYC), had its first installment released on August 22, 2021 via the same application; due to unexpected issues, it ended with its fourth Season in March 2022.
Advertisement:

Kazuki Araya is a new student at Mizaki School. After being greeted by two girls, Akari and Enju, Kazuki admits to them that what his goal for the school year is to have a completely ordinary life. While it doesn't sound like a major goal, the truth is, Kazuki is a ronin ninja who left his village due to being tired of the ninja life. But his past is something he can't just walk away from...especially when his new friends want to start a Ninja Seeking Club!

In 2020, a spinoff titled Moe! Ninja Girls RPG was released. This one takes place in a slight Alternate Universe, in which Kazuki never became a ronin, but instead attends school as part of his duties. Its final season released on March 25, 2021.