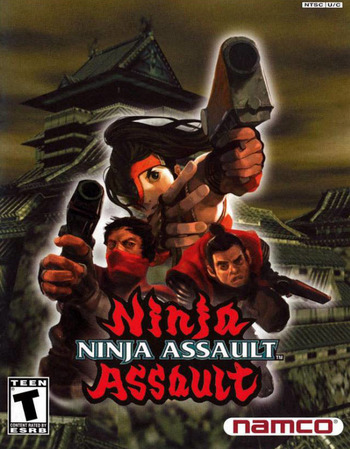 Ninja Assault is a Light Gun Game from Namco premiering in arcades in 2000. The story is simple: an evil demon lord known as the Shogun Kigai has surfaced and kidnapped the Princess Koto to complete his resurrection. Two ninjas, Guren and Gunjo, set out to rescue her. During a scuffle with some of Kigai's mooks, they're cornered near a shrine and all seems lost. However, the shrine opens and reveals mystical weapons...which most from the modern age would recognize as guns. These weapons, however, are very effective against the demon hordes; thus Guren and Gunjo begin turning the tide against the forces of Kigai....

The games was ported to the PlayStation 2 with use of the Guncon 2. There's also an extra story mode showcasing a new character, Aoi, a kunochi out for revenge for the death of her father.

Not to be confused with the Ninja Gaiden knockoff featured on Action 52.

Ninja Assault has the following tropes: