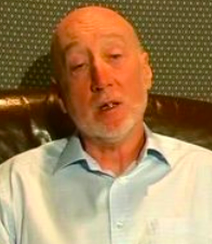 Chris Boucher (born 1943) is a British scriptwriter, best known for his work in science fiction and crime drama, particularly Doctor Who and Blake's 7. He is also known for his own series, Star Cops, an ambitious attempt to do a hard science fiction cop show in space, that was unfortunately crippled by low BBC budgets and Executive Meddling, and was probably the last ambitious SF show the BBC would make until the revival of Doctor Who almost twenty years later.
Advertisement:

Boucher wrote three scripts for Doctor Who, two during the Hinchcliffe-Holmes "Gothic Horror" period of the mid 70s, and one during the Graham Williams era of the late '70s (though still carrying the gothic tone of his first two stories). He also created the quintessential Noble Savage Action Girl companion Leela.

Boucher was the script editor for Terry Nation's Blake's 7 for all four series, after being recommended by Doctor Who's Robert Holmes, and wrote multiple episodes himself, including the famous finale.

He also wrote four Past Doctor Adventures, all of which feature Leela and the Fourth Doctor, and the ongoing "Kaldor City" audio dramas set in the decadent far-future human society depicted in "The Robots Of Death".