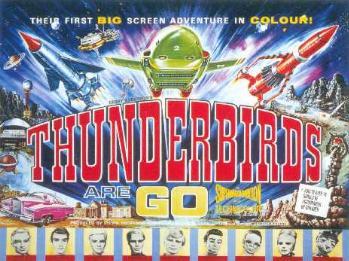 Thunderbirds Are Go is the first Supermarionation feature film based on Gerry Anderson's TV series Thunderbirds, released in 1966.

The Hood returns, this time trying to take photographs of the new Zero-X Martian-bound spacecraft. When his first effort accidentally disables the craft, forcing the mission to be abandoned, International Rescue are asked to help protect the second attempt a year later. While successful in unmasking the Hood's second sabotage attempt, Alan Tracy feels unloved after his father makes him stay in orbit while the other Tracys go to a swanky nightclub to celebrate. Alan then experiences one of the weirdest dreams ever recorded.

The second Zero-X arrives on Mars without difficulty, only to be attacked by one-eyed rock snakes. Fleeing in terror from these fireball-spitting monstrosities, the Zero-X proceeds back to Earth - only for its landing-assistance module to fail, damaging the escape mechanism. Locked into its descent vector, Zero-X is headed directly for the town of Craigsville, Florida, it's up to Alan Tracy to be winched aboard the plummeting spacecraft and attempt a manual repair. With seconds to spare, he reroutes the damaged circuit, cutting himself free and relying on his parachute to carry him away from the doomed spaceship. The astronauts are also able to eject, and the Zero-X destroys the evacuated town of Craigsville in a titanic explosion. Alan is whisked away in FAB 1 to the aforementioned swanky nightclub, where he's honoured as the hero of the day.