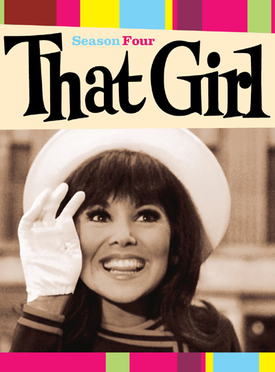 "... that girl!"
—The punchline to the Once an Episode Cold Opening gag.
Advertisement:

The person who'll describe the show That Girl! here will be... that troper!

An American sitcom that aired on ABC from 1966 to 1971, following the adventures of Ann Marie (Marlo Thomas), a budding actress who moved to New York City to make her big break into Broadway. Occasionally aided by her boyfriend Donald Hollinger (Ted Bessell), she attempted or was pulled into many different schemes in hopes of becoming a star, though later seasons focused on more formulaic sitcom situations.

Aside from the comedy aspect, That Girl is often viewed as the forerunner of other successful shows starring single women such as The Mary Tyler Moore Show or Murphy Brown. It also addressed the issues of its time, in its own unique style.

Most famous for the opening of every show, the "That girl!" Title Drop, accompanied by the title itself appearing at the bottom of the screen, with only a few variations over its five year run.