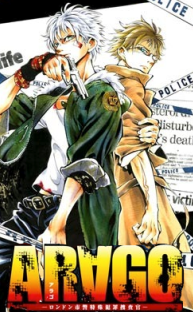 He ain't heavy; he's my brother.
"What is the price of experience? Do men buy it for a song? Or wisdom for a dance in the street? No, it is bought with the price of all the man hath, his house, his wife, his children."
—William Blake
Advertisement:

Official title is AR∀GO: City of London Police's Special Crimes Investigator, but most often shortened to just Arago by fans. The story centers around two twins, Arago and Ewan, whose parents were slaughtered by a Serial Killer named the Patchman. Years later, the vengeful Arago crosses paths with Ewan, who has since become a police officer, just as blood begins to flow again in the streets of London.

After facing him a second time, Arago ends up with the Patchman's supernatural abilities. Instead of wangsting, he joins the London PD and becomes partners with Joe Sullivan.

Oh, and the powers he inherited cause anything not made out of metal or plastic to decay if they touch him. And all sorts of nasty demons are showing up in the city, that only he can see. And he's under suspicion of being the Patchman.

It was written and illustrated by Takahiro Arai, who had previously done the manga adaptation of The Saga of Darren Shan, and has since gone on to draw a manga adaptation of Les Misérables. The manga was serialized in Weekly Shonen Sunday from 2009 to 2011 and compiled into nine volumes.