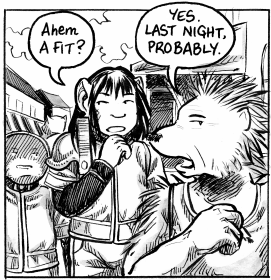 The Captain (center) and Lieutenant de Montfort (left) question a witness.
Kaspall is a fantasy murder mystery Webcomic written and drawn by Lucy Lyall that started in 2005 and finished in 2015.
Advertisement:

Within this comic, Kaspall is the name of the unusual city in which the story takes place. This city is remarkable for two things:

Around the time this story begins, several events are occurring in tandem: a new off-worlder by the name of Alex Gray is being processed by the O.W.R. ("Off-Worlder Registration"); a student psychomantic (mind-mage) named Caroline is doing a field project at the Skein Institute for Professor Jaiva; the Captain and Lieutenant de Montfort ("Call me Harry. Please.") are investigating a curious series of murders; and, in Hazel Karswell's small Greenacre Street apartment building, Sam Goldbourne has fallen behind on paying his rent. Oh, and something odd is happening at a certain mysterious estate.

These facts are, of course, connected.

We recommend starting at the beginning.

The artist has a second webcomic titled Spare Keys for Strange Doors.