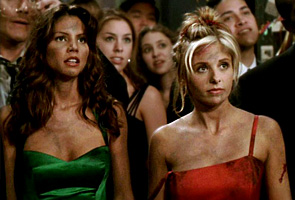 "I thought, Homecoming Queen, I could open a yearbook someday and say, 'I was there, I went to high school and had friends and for just one minute I got to live in the world.' And there'd be proof. Proof I was chosen for something other than this. Besides, I look cute in a tiara."
—Buffy Summers
Advertisement:

This is the final Buffy episode penned by David Greenwalt, as he shifted his attention to preparing Angel for the following season. Aww. Bye, David! As a parting gift, he left us a catfight episode which makes Dynasty look like Little House on the Prairie.

The Scoobies decide to share a limo for their last Homecoming dance. Scott hasn't asked Buffy, but after some arm-twisting agrees to go. The next day, Scott breaks up with Buffy because he finds her too distracted all the time now, which she admits is true (for example, rehabilitating Angel in his mansion). She promises to do better, but Scott's fed up.

Buffy is bummed that her entire high school career will come down to one picture on 1/8th of a page, but Willow and Xander tell her that even that won't be there, since she missed getting her picture taken for the Yearbook. They tell her that Cordelia was supposed to give her the message. Buffy confronts Cordy, who couldn't care less, because it's not about herself. That does it. An enraged Buffy decides to run for Homecoming Queen against Cordy. Meanwhile, Mr. Trick has organized SlayerFest '98, a competition in which its participants (for a modest fee) get to hunt the two slayers, and the winner takes all the money. The competitors are a demon who can create bone blades from his forearms, a human hunter, two German brothers working with an older man in a wheelchair, and Lyle Gorch (from "Bad Eggs") along his bride Candy.

When the limo arrives at Buffy's house, she gets in to discover not Faith, who was scheduled to be the first to be picked up, but rather Cordelia alone, holding a note from their friends saying that they want her and Cordelia to make up on the expensive ride, so they will be forced to spend some time alone together. When the driver stops at their destination, they are surprised to discover not Sunnydale High, but a shack and some woods. The pair fight off their adversaries and run to the school. Meanwhile, Trick is dragged away from his monitor room by two policemen.

Buffy and Cordelia make their way to the library, only to find Giles knocked out and the Gorchs waiting for them. During the fight, Candy is dusted thanks to a spatula that Cordelia acquired. Lyle is infuriated and is ready to kill the two, but Cordelia finally asserts herself and scares Lyle away when the chips are down. Buffy realizes the corsages they got in the limo were electronic tracking devices. She puts them on the German brothers, who target and kill each other with their high-tech equipment, each thinking they're targeting one of the Slayers.

The policemen bring Mr. Trick to the office of Mayor Wilkins, who tells Trick that he needs to control rebellious youth elements during this election year. Mr. Trick, knowing the Mayor means business, agrees to join his administration.