Film / We Are the Night 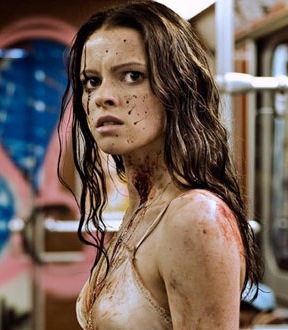 "If you don't want to be like everyone else, you've got two choices: You either get crushed in their world - or you build your own."
Advertisement:

Lena is a twenty-something girl who lives together with her mother in Berlin and tries to live off what little they have - and of what she can steal. All of a sudden, she attracts the attention of two very different parties: the Berlin police, especially the curious policeman Tom, for a particularly cheeky theft and a band of three vampiresses who discover her in an underground club. The eldest of the vampires, Louise, falls in love with Lena and bites her to make her a new companion.

While Lena is scared at first, the other vampires, Louise and her younger companions - Charlotte and Nora - quickly introduce her to the positive aspects of her new "life": supernatural powers, enhanced attractiveness, endless parties and every luxury she can dream of. But while Louise does her best to make Lena love the experience as a vampire, both Charlotte and Nora let on hints to the darker sides of it. And it all goes downhill when Tom and Lena take a liking to each other - and Louise, who waited centuries to find her perfect partner, is not amused about a mortal man standing in her way.

We Are the Night is a German live action movie from the year 2010, and was released in US theaters in May 2011. Although the first version of the script was already finished in 1999, it was necessary for other vampire movies like Twilight to become popular for the author to be granted the necessary sponsoring to produce it. The author/director is the same guy who is responsible for The Wave (2008), Dennis Gansel. The movie was received as a pleasant change from the freshly risen Twilight routine by the German audience, so the producers decided to release it in other countries as well. Up until now it has been released in France, Kazakhstan, Russia, Belarus and the US.