Film / No Name on the Bullet 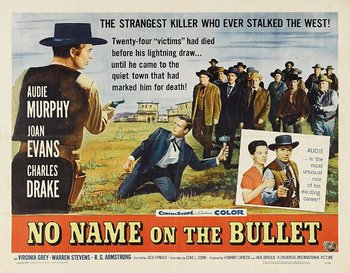 No Name On the Bullet is a 1959 western directed by Jack Arnold, and starring Audie Murphy Playing Against Type as a cold-blooded killer, Charles Drake as a good-hearted physician, and Joan Evans as the inevitable love interest.

John Gant (Murphy) is a gun for hire who always provokes his targets into shooting first, and never gives away who he's gunning for. The town goes nuts and tears itself apart trying to figure out who hired him and who he's coming for, while he sits back and watches with a Cheshire Cat Grin.

No Name on the Bullet is frequently considered one of the best of Murphy's westerns.

No Name On The Bullet contains examples of: