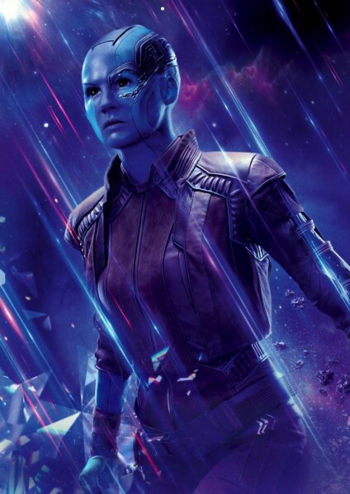 "You were the one who wanted to win. And I just wanted a sister!"

Affiliation(s): Children of Thanos, Guardians of the Galaxy, Avengers

"I will hunt my father like a dog and I will tear him apart slowly, piece by piece, until he knows some semblance of the profound and unceasing pain I know every single day."

The Luphomoid daughter of Thanos, she has been cybernetically enhanced to become a savage killer. Though initially aligned with Thanos' crusade, she develops more noble qualities over time, eventually breaking free from her dark past to form a close bond with her sister Gamora and act as a recurring ally to the Guardians of the Galaxy.

open/close all folders
# to H
I to W