Spoilers for all works set prior to the end of Avengers: Endgame are unmarked. All spoilers for Endgame under the spoiler folder are also unmarked. 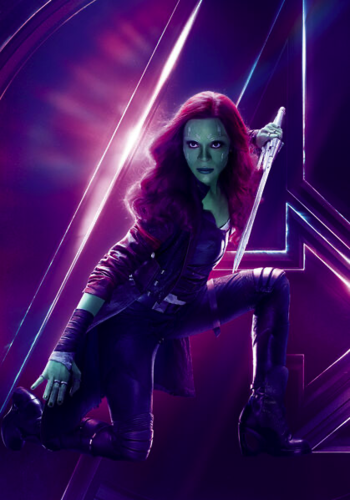 "I have spent most of my life surrounded by my enemies. I will be grateful to die among my friends."

Affiliation(s): Children of Thanos (formerly), Guardians of the Galaxy (formerly)

"Gamora: soldier, assassin, wanted on over a dozen counts of murder."
— Rhomann Dey

A Zehoberei woman taken in and modified by Thanos to be a warrior and master assassin in his service. 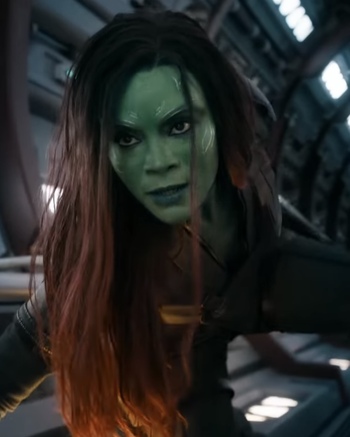 "I tried to kill you. Several times. But eventually, we become close, we become friends. We become sisters."
— Nebula

In an alternate timeline, Gamora, still a Child of Thanos, would join her father in attempting to conquer Earth in 2023. 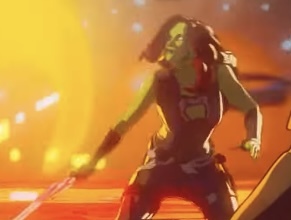 Affiliation(s): Guardians of the Galaxy

The Gamora of Earth-29929, who is killed during Ultron's genocidal quest for peace. 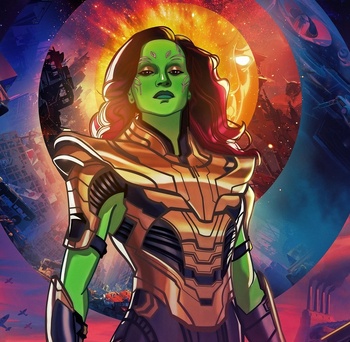 A Variant of Gamora who killed her father Thanos and allied with Iron Man in a quest to destroy the Infinity Stones.

"All my life, I dreamed of a day... a moment when you would get what you deserved. And I was always so disappointed."
Feedback

Due to timetravel, this Gamora hasn't even met Quill before, much less fallen in love with him. Promting a very different response than what he was expecting.

Due to timetravel, this Gamora hasn't even met Quill before, much less fallen in love with him. Promting a very different response than what he was expecting.