Fanfic / The Vigilante Boss and His Failed Retirement Plan 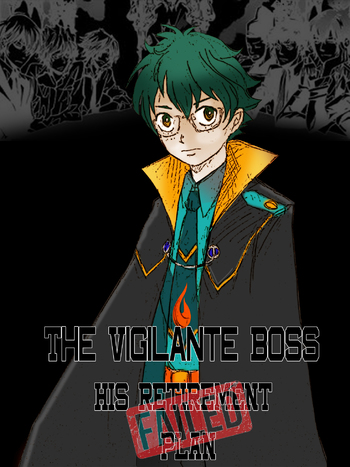 Cover by Author
It was supposed to be a joke, a drastic one where Izuku faked following Kacchan's advice to take a leap of faith. Then the fence on the rooftop gave up on him. Dying with many regrets awakens the sleeping sky in his soul, reminding Izuku that he was supposed to be on retirement for life and the next one- which is this one. Unfortunately, Hyper Intuition was a bitch to deal with in a world of heroes and villains, and he thought he could take advantage of the abundance of heroism in this world. You'd think the world doesn't need more heroes or a Vongola.
Advertisement:

The Vigilante Boss and His Failed Retirement Plan is a crossover fanfic between My Hero Academia and Reborn! (2004), written by Forlorn_Storyteller.

After an accidental fall from the rooftop, Izuku reawakens his past lives as Giotto and Tsuna. Tired of fighting, Izuku gives up on his dreams of being a hero and dedicates his third chance at life in search of his long-overdue retirement. Nothing is ever easy for him as he finds himself dragged into the world of Heroes and Villains whether he likes it or not.

The Vigilante Boss and His Failed Retirement Plan demonstrate examples of: