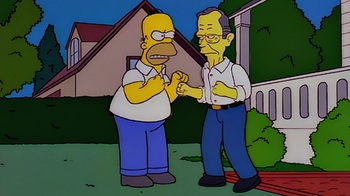 During a neighborhood rummage sale, Homer sees a moving van at a vacant house across the street from his home and learns that the new neighbors are former President George H.W. Bush and ex-First Lady Barbara Bush, whom everyone (except Bart and Homer) welcomes with open arms.