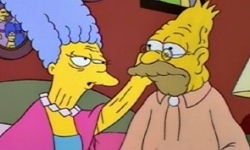 Grampa Simpson falls for Grandma Bouvier...and then loses her to Mr. Burns. Meanwhile, Bart steals Homer's credit card to purchase an animation cel - and soon finds out that said cel is a rip-off.