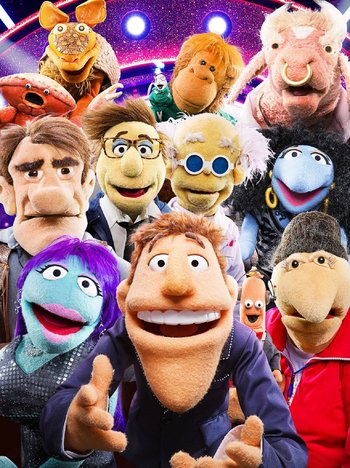 That Puppet Game Show is a series by The Jim Henson Company that ran on The BBC in 2013. The basic concept is a Game Show in which celebrities are given silly things to do by a group of manic puppets, with their winnings going to charity. The show seems to have been an attempt to recreate the magic of The Muppet Show in a different format. It was not entirely successful in this. (But then, it took a season for The Muppet Show to find its feet.) The cast included British Muppets stalwart Louise Gold, CBBC puppeteer Dave Chapman and Jim Henson's son Brian.
Advertisement:

In 2014 it was announced that it had been axed due to poor ratings and reviews.

The "backstage" characters were: