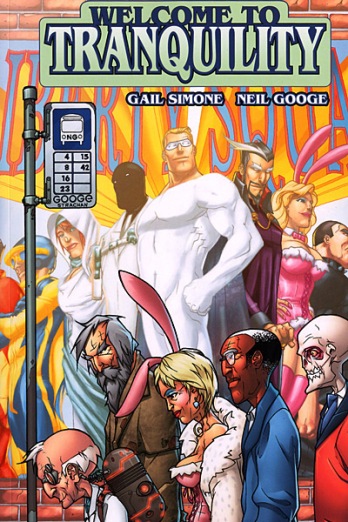 Let's see how spry you look in your seventies
Advertisement:

Welcome to Tranquility is an American comic book series created by Gail Simone and Neil Googe and published by WildStorm. It is set in the fictional California town of Tranquility where superheroes and supervillains, also known as "Maxis," have retired and settled down to raise families after their hectic and action-packed youths. Despite the presence of both heroes and villains there is little crime amongst the populace, the heroes have grown old and the villains have either been cleared of their criminal charges or served out their prison time, allowing them to live in (relative) peace. Old rivalries remain, but revolve around traditional aspects of retired life, such as debating who gets the apples that fall on either side of a property line.

A large cast is composed of both retired Maxis, the children (and grandchildren) of Maxis that have grown up in this Superhero Retirement Community, and the normal amount of civilians to be found in any small town. Sheriff Thomasina "Tommy" Lindo, who has no powers, works to deal with the normal conflicts that arise in any town, but which have the added threat of being carried about by people with an inordinate amount of superpowers. Alex "Judge" Fury, the Mayor of Tranquility and hero of World War II, is also featured along with his wife, Suzy "Pink Bunny" Fury, and Colonel Isaac Cragg and Bad Dog. Together they formed the Liberty Squad along with Maximum Man, Astral Man and Arnold "Cosmos" Stipple before Astral Man was murdered and they all retired to Tranquility.

The original volume, twelve issues long, was published in 2007 and 2008 before it went on hiatus, returning in 2010 for a planned six issue limited series. A part of the Wildstorm Universe, Welcome to Tranquility is unique in its relative disconnect from other series set in the same universe. The Authority are mentioned on occasion, and Gen¹³ guest stars in the second arc of the original series, but the majority of the story remains independent.