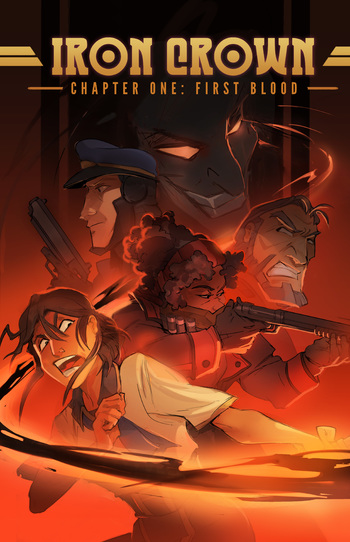 Diane Wiess thought being a dictatorʼs daughter was a rather cushy position, all things considered.

...until demons threatened the southern border of Chandera, and riots began to consume the rest. Anticipating retaliation against his misdeeds, her father strikes a deal with an equally infamous mercenary company - the Iron Crown Brigade. Their mission: escort Diane out of the crumbling country into the safe haven of the powerful Imperium, and protect her at all costs. Along the way, as Diane reluctantly confronts the shadows of her fatherʼs dark legacy as well as embarks on a Roaring Rampage of Revenge, she begins to piece together the enigma of Shard - the ancient demon of war bound to her as he faces his own bloodstained past.

is an ongoing Diesel Punk action-adventure story by writer/artist kradeelav. With silly antics from an adorable pug, vain-villains-turned-very-reluctant-protagonists galore, and badass mercenary ladies that inadvertently make a found family in each other - Iron Crown nevertheless trades deeply in the question of What Makes A Monster for humans ... and the truly unholy beings that lurk on the edges of its world.

Start from the beginning here