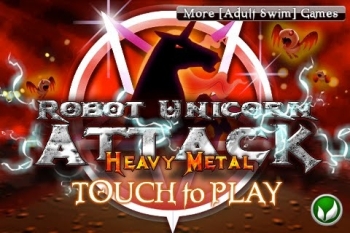 GLORIOUS!!!
"WAR AND ANGER SHALL REIGN! (THE CLASH OF IRON CAN BE HEARD)
BY BLINDNESS YOU'RE DRIVEN INSANE! (I'M LOST IN ANGUISH AND GRIEF!)
SORROW WON'T WANE 'TILL YOU DIE! (A SHATTERED BODY DEEPLY HURT)
AND DARKNESS WILL COVER THE LIGHT!
IT'S GONE FOREVERMORE~!"
— You, while playing this game.
Advertisement:

Set in a Fire and Brimstone Hell, those who break the many laws of this place have their souls transferred into Robot Unicorns, powered by numerous pentagrams to get the Unobtainium ore the world needs for its magickal experiments. But then one got the idea to make a clean break for freedom, knowing perfectly well he couldn't possibly escape, but hellbent to take as much as it down with him as he possibly could. If you fail to dash through a pentagram or hit the wall, you explode in a fireball of agony and are transferred into a new Robot Unicorn. Flaming imps oversee your escape, and the choirs of the damned pound along to the beat of your heart. Again, you know it is hopeless, perhaps even futile, to even comprehend escape. But at this point, you're too far gone to care. All that is left is to run and destroy.

Oh, and it may just be the most brutal game ever.

Like the original Robot Unicorn Attack: Heavy Metal Edition, it is also available for the iPhone for necro-tracking on the go. Unlike the original, you can play it without looking like a Girly Man. Fun-fact: this game originally debuted on the iPhone before it appeared on Adult Swim Online.