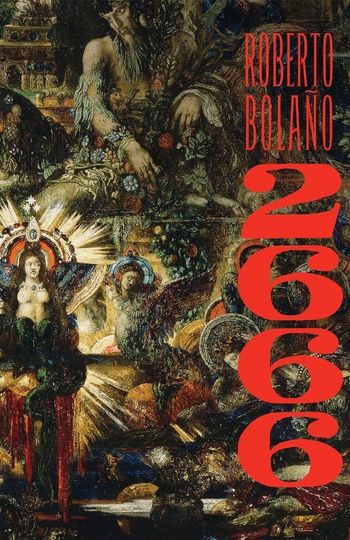 An epic postmodern novel written and left unfinished by Roberto Bolaño. It depicts the unsolved and ongoing serial murders in Santa Teresa, Mexico (aka Ciudad Juárez

), and the Eastern Front of World War II. Spanning over eighty years, the plot also revolves around the exploits of the reclusive author Benno von Archimboldi, and the people whom he has affected. The story was originally released in 2004, adapted into a stage play in 2007, and was eventually translated for English audiences in 2008. Bolaño was posthumously awarded the 2008 National Book Critics Circle Award for it as well. The novel is divided into five parts:

The Part About the Critics: A group of European literary critics discover the works of Archimboldi and bring them to forefront of academic debate and prominence. After building their careers around the elusive author, the critics seek him out in the last place he was supposedly sighted: Santa Teresa, Mexico.

The Part About Amalfitano: Óscar Amalfitano works as a philosophy professor at the University of Santa Teresa. As he slowly loses his grip on reality, he learns of the crimes being committed in the city and attempts to keep his daughter safe.

The Part About Fate: Oscar Fate, an American newspaper reporter, wanders around the country taking assignments. He is eventually sent to Santa Teresa to cover a boxing match, but he quickly becomes more interested in the killing spree plaguing the city.

The Part About the Crimes: The seemingly endless crime wave and its investigation are chronicled from the perspective of the Santa Teresa police force. Not only are the murders described in detail, but the attempts to find suspects and the corruption and ineffectiveness of the authorities as well.

The Part About Archimboldi: The origin of Benno von Archimboldi is finally unveiled. He’s really Hans Reiter, a Prussian born in 1920 who fought for Germany in World War II and created a new identity as his homeland - and all of Europe - was reconstructed. The narrative follows Archimboldi's childhood all the way into his eighties, when his work has gained literary acclaim and made him a contender for the Nobel Prize.

Watch out for the Tropes:

An oasis of horror in a desert of boredom.