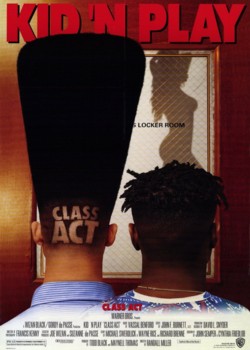 is a 1992 comedy film starring hip-hop duo Kid 'N Play. The film is an urban retelling of the fairy tale The Prince and the Pauper. The main characters are Duncan Pinderhughes, a genius high school student, and Michael "Blade" Brown, a juvenile delinquent.

Duncan is getting ready for graduation, but finds out during an interview that despite his perfect SAT score and GPA, Harvard University will not admit him unless he can pass phys. ed. Ex-convict Blade is released from jail, and told by his parole officer that the condition of his release is staying out of trouble and a satisfactory graduation from high school. Having moved to a new neighborhood, Duncan now has to go to Higgins High School to complete his graduation requirements. As both boys encounter one another in the hallway, causing Blade to forcefully push Duncan aside, a mishap results in their pictures being swapped on their school records, causing everyone to think that each is the other one. Thus Blade is placed in Gifted classes, while Duncan is placed in minimal classes with substandard conditions and miscreants for classmates.

At first both boys are perplexed about their situation, until they learn what has happened. Duncan is eager to tell the Principal what has happened while Blade, on the other hand, decides to use this situation to his advantage, threatening Duncan to pass all his classes, while also trying to give the clumsy genius a new persona to keep his good name and rep intact. Despite the changes in their lives, both boys gradually discover their own untapped skills while continuing the charade.