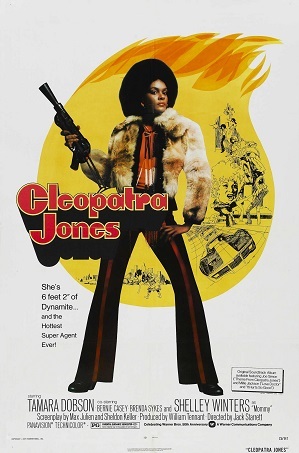 Cleopatra Jones is a 1973 Blaxploitation film.

Tamara Dobson plays the eponymous Jones, a 'Special Agent to the President', whose mission is the destruction of the drug trade in America. Statuesque, cultured, lethal, Jones keeps tabs on her home community while carrying the fight around the world. After destroying a field of poppies in Turkey with an estimated street value of $30 million (about $160 million in 2015) by a napalm strike, Jones earns the ire of "Momma" (Shelley Winters), a domineering butch lesbian drug kingpin who operates in Cleo's hometown of L.A. Intent to draw Cleopatra into a death trap, Momma orders a shakedown on the B&S House - a community clinic where junkies can get clean, founded and run by Jones' lover Reuben Masters (Bernie Casey

). When the shakedown uncovers drugs and Jimmy Beeker,one of the ex-junkies, is arrested, Jones returns to set things right.

After stopping an assassination attempt at her airport arrival, Jones meets with the local police chief and orders him to have the DA back off the prosecution for 72 hours while she investigates. He agrees; both are (rightly) concerned that the conviction might spark rioting; this is underscored when Cleo visits the B&S house and witnesses the clientele cleaning firearms and making Molotov Cocktails.

Meanwhile, when word gets out that Cleopatra Jones is returning, Doodlebug Simpkins (Antonio Fargas

), one of Momma's drug distributors, decides to quit and go independent, keeping all the drug proceeds for himself - instead of the "85/15...expenses from the 15" deal he has with Momma. He refuses her offer of 25%, and warns her that any threats against him will be met with lethal force.

Cleo, Masters, and Chief Crawford know that if Jimmy goes to jail, B&S will be shut down and the community will riot. Cleo, looking for the corrupt cops who ordered the raid, confronts Doodlebug, who tells her he no longer works for Momma, simultaneously giving her up and introducing Jones to his girlfriend Tiffany, a lounge singer.

Cleo wants the drugs out of her community. Doodlebug wants Cleo out of his business. Momma wants them both dead. Someone's getting disappointed!

Definitely a product of its time, Cleopatra Jones has aged fairly well; the dialogue tends to be natural and is quite snappy in parts while the Jive Turkey bits are few and far between. The acting can be uneven in parts - compare Jimmy's Narmtastic confession to Masters' stonefaced comfort during a junkie's torturous withdrawal session. Some of the comments made by minor characters are evocative of Jack Black's wooden delivery in King Kong, blank face and all. Race relations - always a focus in the blaxploitation genre - are fairly positive: a motorcycle rally shows blacks, white, and hispanics competing equally; background events have mixed crowds interacting normally. One event does show a group of (black) kids harassing a (white) man, but it's not easy to tell if the man was trying to steal their ball or if the kids just decided to screw with him.