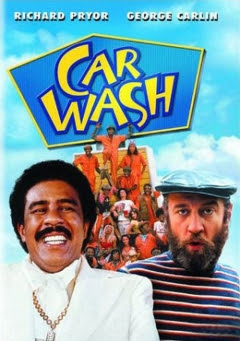 Starring Richard Pryor and George Carlin! Right?
Car Wash is a 1976 musical Blaxploitation movie that centers around the Deluxe Car Wash facility, located on a busy corner of Los Angeles. Deluxe employs a number of rather colorful workers, all of whom have rather wild yet quirky personalities, and they all act crazy just to make it through the day; meanwhile, Deluxe itself is on the brink of going out of business, as it's one of the last establishments in town that still washes cars by hand.
Advertisement:

Deluxe Carwash is owned and operated by a man simply known as Mr. B (Sully Boyer), a frustrated middle-aged fellow who has to deal with the craziness of his workers, the stress of trying to stay in business, and wondering what the motives are of his seemingly slacker son Erwin (Richard Brestoff), who apparently wants to drop out of school and become a part of the working class by working at the car wash with the others. The employees of the car wash include Mr. B's self-conscious and lonely cashier, Marsha (Melanie Mayron); ex-con Lonnie (Ivan Dixon), who has a position of authority over the other workers; Earl (Leonard Jackson), who considers himself superior being, "The only nigger who doesn't get wet," since he's a dryer; T.C. (Franklin Ajaye), a young man determined to keep his estranged girlfriend, who appears to be waiting for a prince charming to sweep her off her feet; Floyd and Lloyd (Darrow Igus and DeWayne Jessie), a duo of would-be musical entertainers with dreams of show biz; Lindy (Antonio Fargas, future Huggy Bear), a transvestite; Hippo (James Spinks), a very large employee who has eyes for loitering prostitute Marleen; Geronimo (Ray Vitte), a Know-Nothing Know-It-All who offers romantic advice to Scruggs (Jack Kehoe), a cowboy-clad gas pumper, who worries over his wife after having a one-night stand with another woman; Goody and Chuco (Henry Kingi and Pepe Serna), a pair of mischievous knuckleheads; Justin (Leon Pinkney), a young man who wants to marry his girlfriend, who wants him to go back to college and make something out of himself; Snapper (Clarence Muse), an elderly man who shines patrons' shoes; Slide (Garrett Morris), a con-artist who ends up arrested for unpaid parking tickets; and Abdullah (Bill Duke), a recently-converted Black Muslim, who has an enormous chip on his shoulder, and appears bitter at the entire world.

Noted comedians George Carlin and Richard Pryor make brief appearances in the movie as well - Carlin as a taxi driver, who continually tries to track down his passenger (Marleen), who stiffed him on fare; Pryor as the pimpish Daddy Rich, a televangelist, who praises money more than his does God. The Pointer Sisters also appear as Daddy Rich's all-female entourage.

The movie itself wasn't necessarily a hit when it was first released, but it has definitely picked up a significant cult following over the years; people are probably more familiar with its theme song than they are the movie itself.