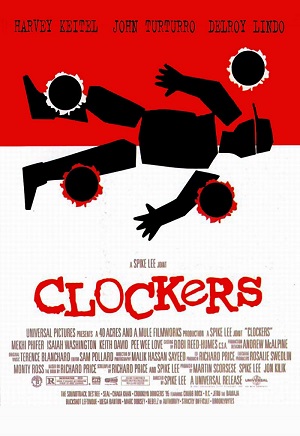 "Just another stain on the sidewalk."
Advertisement:

Clockers is a 1995 Spike Lee movie (based on the novel by Richard Price) about the events surrounding the a murder of a night manager of a fast food restaurant in Brooklyn, NY. Similar to The Wire, it's one part Police Procedural, one part "hood movie," taking a bleak look at how the war on drugs systematically destroys the lives of the African-Americans living in the projects.

The "Clockers" of the title are the dealers who stand on the corners and in the courtyards of the projects slinging drugs, on constant lookout from the police, often hiring young children to act as lookouts as they ply their trade. Strike (Mekhi Phifer) is the leader of the crew that works the benches in his projects for neighborhood crime lord Rodney Little (Delroy Lindo). Another one of Rodney's dealers, Darryl Adams (Steve White), works out of a fast food restaurant in relative safety and comfort, but has been stealing from Rodney. Rodney hints that Darryl's spot would go to Strike if Strike were to take Darryl out.

That night, Darryl Adams is found murdered in the restaurant's parking lot. Homicide detectives Klein (Harvey Keitel) and Mazilli (John Turturro) arrive to investigate, and the case appears to be open-and-shut when a man named Victor Dunham (Isaiah Washington) confesses to shooting Adams in self defense. By all accounts, Victor is an honest, hard-working man struggling to raise a family in the projects on two low-income jobs. Klein doesn't believe the confession, especially when he discovers that Victor is Strike's older brother. Klein believes Victor is covering for Strike, who is a "known scumbag" in Rodney Little's organization who had motive to kill Darryl Adams.

Strike adamantly denies any involvement with the murder, but as Klein starts to hound the suspected killer more and more, Rodney's affable and caring facade as patron of the neighborhood begins to collapse as the investigation gets closer to his operation. With his brother in jail, Strike finds himself caught between a relentless detective and his ruthless boss and crew, because if there's one rule that everyone in the projects follow, it's that you never talk to the police.