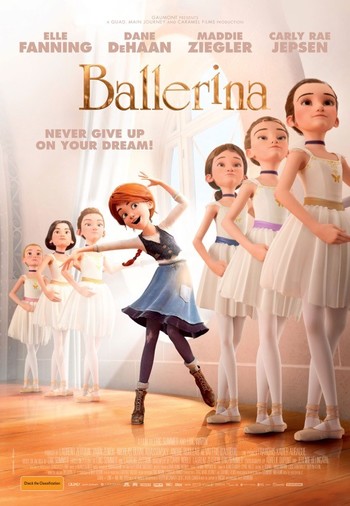 Ballerina is a French-Canadian animated movie from Entertainment One. It was co-directed by Eric Summer and Éric Warin. It features the voice talents of Elle Fanning, Dane DeHaan, Maddie Ziegler, and Carly Rae Jepsen. The film was released on December 14, 2016 and was released in America on August 2017 under the title Leap!

Set in 1879, the film follows poor orphan girl Félicie Milliner, who aspires to become a ballerina. Together with her best friend, young inventor Victor, Félicie leaves her orphanage in Brittany and travels to Paris, where she assumes a different identity and becomes a dance student at the Paris Opera. Joined by Victor and the mysterious caretaker of the Paris Opera, Odette, Félicie aspires to follow her dreams and become the greatest ballerina in the opera.

November 2017, following after Lionsgate's acquisition of Starz (and its video distributor), Ballerina was released on Blu-ray Disc and DVD.