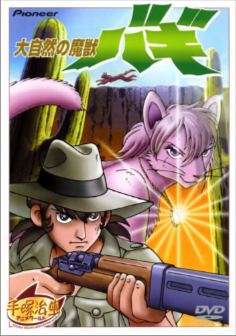 Just another story about a boy and his genetically modified super intelligent talking pet cat
Advertisement:

A Science Fiction anime film, written and directed by Osamu Tezuka in 1984. It was a protest against gene recombination, that was being legalized in Japan during that time.

When he was a little boy, Ryo Ishigami received a present from his father: a pink kitten, whom he named Bagi. As the little cat grew, it started to show signs of intelligence beyond a normal animal. She tried to read, write and walk on hind legs. The boy's father was terrified that the kitten could be a mutant of some sort, and decided to get rid of Bagi, despite Ryo's protests (he and the cat had become very good friends by that point). However, the father did not have to do anything, for Bagi had escaped.

Now, age 15, Ryo is a member of an up-to-no-good motorcycle gang, skipping school and getting into trouble with his new friends. For his misdemeanor he blames his father, who, busy with his detective work, is seldom seen at home, and his scientist mother, who completely devoted her life to her profession and does not even live with her family anymore.

One day the gang was riding about town, when its leader spotted a young woman, and decided to chase her, just for fun. When finally catching up with her, he discovers, to his horror, that the "lady" is, in fact, some sort of monster, who immediately starts to attack one gang member after another. When only Ryo is left, the monster-lady looks at him, but does not harm him, and runs away. After the rest of the gang comes back to their senses, the leader swears to find the monster-lady who attacked them, and take revenge.

They find an abandoned house, when they suspect she might live, and decide to wait for her inside. When darkness came, the leader sends Ryo for a lookout outside. Right then the monster returns, and attacks the gang once again. Ryo turns to the door, expecting to be attacked next. When the monster walks out, she turns out to be half-woman, half-cat. She talks, and tells him that she is Bagi. Terrified of what he saw and hears, Ryo gets on his motorcycle, and rides home as fast as he can.

When he gets home, he finds the cat-woman to be waiting for him. From her he learns that she is indeed his old cat, only grown-up into what she is now. When Ryo asks her who she is: a cat or a human, she replies that she does not know herself; she has been looking for another of her kind for years, but with no success. As he thinks about Bagi's possible origin, he remembers that his father found her near the laboratory his mother works at. The two decide to go there, in search for answers.

And THAT... is only the premise.

The film had only been officially released in Japan on DVD and Blu-Ray.