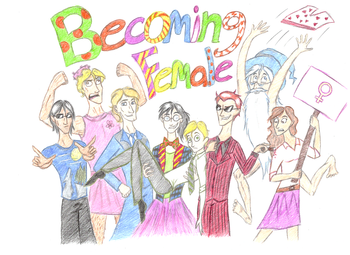 "Becoming Female" is a Harry Potter fanfic by Venus God. Think My Immortal with "sexists" in place of "preps".
Advertisement:

Sypnosis: After Snape makes him drink a potion, Harry falls unconscious. He wakes up in the infirmary to discover that the potion turned him into the perfect female form. He, er, she, suddenly has the hots for Draco Malfoy but faces antagonism from Ron, who is sexist.

The story pretty much revolves around Crystal's (Harry's female name) attempt to marry Draco, while Ron, (who is sexist), attempts to seduce (and later rape) Crystal. Also, Gilderoy Lockhart inexplicably reappears. After losing control of Malfoy Manor to Lucius (who is also sexist), Draco organises a talent contest to raise money for the wedding. Meanwhile, Ron returns from New York, having changed his name to Ron Raper (did I mention his sexism?). Ultimately, Crystal and Draco get married and Ron Raper is eaten by the giant squid. There was a sequel, called "Being Female" which got deleted.

. The sequel is archived here