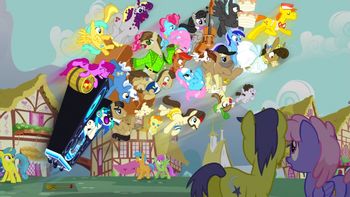 Just an ordinary day in Ponyville.
"This episode really is a love letter to the fans who've supported the show to allow it to go this far."
— Jim Miller

At their home, Cranky Doodle Donkey and Matilda are excited for their upcoming wedding. But as Matilda checks over the invitations, she finds out that the wrong date has been printed on them; instead of tomorrow, the invitations say the wedding is that very day. The mishap occurred because Cranky hired Derpy to have the invitations printed for cheap, who subcontracted the job to the inexperienced Featherweight. A frantic Matilda rushes out in search of Pinkie Pie, determined to get everything moved up a day.

Derpy shares her guilt with Dr. Hooves, wishing she could go back in time to undo her screw-up. The Doctor invites her to his home, where he explains to her that he has mastered time travel and is currently working to find a way to make time come forward to you, but the two soon forget the topic — the Doctor goes on a tangent about science, while Derpy is distracted by the Doctor's inventions, especially his flameless fireworks (which look like rainbow-colored roses, though the Doctor admits he can't figure out how to make them go off). When the Doctor tries to remember what they were talking about in the first place, Derpy reminds him that the wedding is today, which makes the Doctor panic and rush off with his suit for Rarity to tailor it, leaving Derpy on her own.

Unfortunately for everypony, a bugbear (a giant bear/bee monster) is attacking Ponyville, and the Mane Six are occupied with fighting it. With Pinkie Pie unavailable, Matilda enlists the help of Amethyst Star, formerly the best planner in all of Ponyville, to move her wedding on schedule. As they run off, Derpy asks if she can help and is given the task of getting the wedding flowers. However, when she asks the Flower Trio about it, she's told that they haven't even received the flowers. Meanwhile, Doctor Hooves goes to Carousel Boutique in search of Rarity and finds that she isn't there. He asks Vinyl Scratch if she knows where Rarity is, but since Vinyl Scratch has music playing through her headphones, she doesn't hear the question. She ends up leading him to the bowling alley instead; there he meets three ponies, who offer to help adjust his suit in exchange for joining their team and helping them win a bowling tournament.

At the town hall, Lyra and Bon Bon are setting up wedding decorations when Lyra offhandedly mentions the bugbear attack. Bon Bon immediately stops decorating, shocked at the possibility that the monster has found her. To Lyra's bewilderment, Bon Bon reveals that "Bon Bon" isn't her real name (it's actually Sweetie Drops), and that she was part of a defunct anti-monster agency. Sweetie Drops was the one to capture the bugbear and put it in Tartarus initially, but after it escaped, Celestia dismantled the agency and its former agents went undercover. A dejected Lyra then asks if it means their friendship was fake. Bon Bon assures Lyra that it was all real before rushing off to hide from the bugbear in the crowd.

Meanwhile, Matilda is trying to get her hair done at the spa, where she meets Steven Magnet — Cranky's friend and Best Monster for the wedding. As Steven regales her with tales of Cranky's undying love, Matilda calms down, only to return to a frantic tizzy when Steven insists that the wedding is the most important thing for everyone.

On the outskirts of town, Octavia Melody is practicing at home, but she laments that all of the traditional wedding songs sound so dull and uninspired. When her roommate Vinyl Scratch enters and begins playing electronic beats, it provides inspiration that invigorates both of them. Their impromptu jam is interrupted when Octavia realizes they're going to be late, and the two musicians race to the ceremony on a mobile DJ booth. The two go on a madcap ride through Ponyville, picking up scores of bystanders along the way and ending with a crash that dumps everyone into their seats just in time for the ceremony. In the meantime, Derpy has replaced the flowers with the Doctor's flameless fireworks. Once everypony is settled into place, Bon Bon announces that the bugbear has been stopped. Doctor Hooves enters, having ditched his suit for a scarf, and the wedding begins after Derpy inadvertently locks the Mane Six out of the town hall.

The Mayor presides over the wedding, commenting on how the love of Cranky and Matilda has brought them together, and says that though they're the main characters in their own story, it's the side characters that enrich their lives. Cranky and Matilda say "I do," and the Mayor officially marries them as the fireworks go off, triggered by the couple's love. Outside, as the Mane Six watch through a window, Twilight Sparkle comments on how lucky they are to live in Ponyville. She says that she loves them all, and the six of them engage in a group hug.