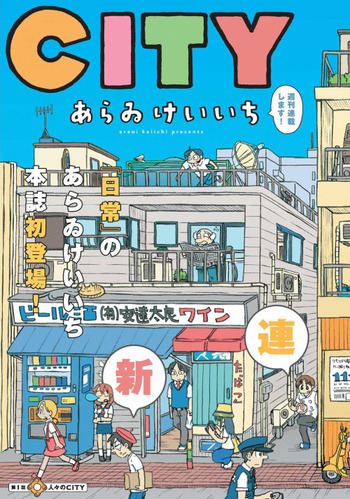 This is everyone's City.
"Long ago, there lived a bird. One day, the bird fell asleep while flying and a tragedy occurred. The bird flew beak-first into a long rock protruding up from the ground. The bird was afflicted by a disease which caused it to turn into stone as well, and so it remained lodged in the rock as eons passed by. In some eras it was worshipped, in others it was used for storage... Its function changed as it took root in different areas. And now...

This is the story of a City that has nothing to do with that bird."
— Opening narration, volume 1

What happens when a penniless college student moves into an ordinary city filled with extraordinary people?

CITY is a Japanese comedy manga by Keiichi Arawi. Starting as what seems to be a Spiritual Successor to Nichijou, the series follows Midori Nagumo, a sophomore student at Mont Blanc Uni with hardly a penny to her name. She's moved into the simply-named City and, together with her friends Ayumu Niikura and Wako Izumi, attempts to get herself enough money to get through her new life. Along the way, she meets a massive cast of people who bring this City to life.

The manga had begun publication in Morning in 2016, and was licensed for English release by Vertical Inc. in 2017. The first English volume was released in March 2018.

Not to be confused with City Hunter, or the trope The City, although the City definitely qualifies for this at times.

And now... This is a list of tropes that has something to do with the CITY: