Literature / No Country for Old Men 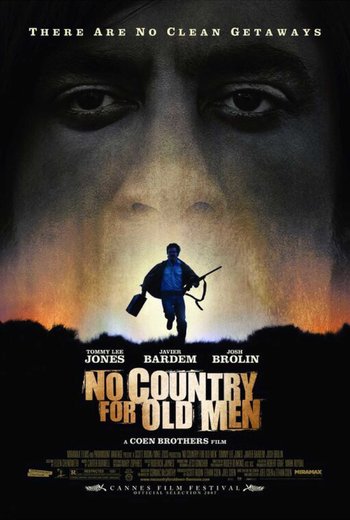 "What you got ain't nothin' new. This country's hard on people. You can't stop what's coming. It ain't all waitin' on you. That's vanity."
— Ellis
Advertisement:

No Country for Old Men is a 2005 neo-Western thriller novel by Cormac McCarthy, a grizzled old man who refuses to discuss his books beyond their often disturbing content. In 2007, it was adapted into a film written and directed by The Coen Brothers, and the result was a chilling film that's considerably bleaker than anything else they've done.

The place is West Texas; the year, 1980. When rugged Vietnam veteran Llewelyn Moss (Josh Brolin) finds the horrific aftermath of a botched drug deal and takes a suitcase filled with money, he sets in motion a spiral of violence beyond his control or comprehension. A cynical old sheriff, Ed Tom Bell (Tommy Lee Jones), is determined to prove that there's still a place for justice in an otherwise unfair and cruel world as he sets out to find Moss and protect him from the owners of the money.

But for every action, there is an equal and opposite reaction, and the men behind the deal have sent ruthless hitman Anton Chigurh (Javier Bardem) to retrieve the briefcase. Chigurh is a man willing to do absolutely anything — to "follow a supreme act of will," as he puts it — in order to achieve his aims... and it's no longer just the money he's after.

This film was one of two collaborations of Paramount Vantage and Miramax released in 2007 alongside There Will Be Blood, itself nominated for multiple awards. At the time, Miramax was owned by Disney. Miramax was subsequently sold to Filmyard Holdings in 2010, then to beIN Media Group in 2016. Four years later, Paramount acquired a minority stake in Miramax, and now holds the worldwide rights to all films it had co-produced with Miramax (except for Sliding Doors, which is now owned by Shout! Factory), along with the rest of the Miramax library.

open/close all folders
A-G
H-Z
"Anywhere not in your pocket. Or it'll get mixed in with the others, and become just a coin... Which it is."
Feedback