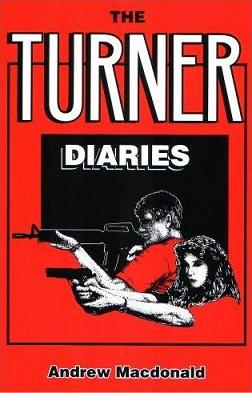 Defend the white race with crappy self-publishing!
"Then, of course, came the mopping-up period, when the last of the non-White bands were hunted down and exterminated, followed by the final purge of undesirable racial elements among the remaining White population ... But it was in the year 1999, according to the chronology of the Old Era — just 110 years after the birth of The Great Onenote 1889 was Adolf Hitler's birth year — that the dream of a White world finally became a certainty."
—A terrifying vision of the future....shame this is supposed to be the Happy Ending. Yeah.
Advertisement:

One of the most important books of the white supremacist movement, and one of the most controversial books of its kind since Mein Kampf, The Turner Diaries is about a group of white supremacists who are fighting a guerrilla war against the US government in a dystopian era where, controlled by the Israeli Zionists and using the blacks as shock troops, the government terrorizes the public into supporting the "mongrelization" of the white race.

It was written by William Luther Pierce, founder of the white nationalist and Neo-Nazi group National Alliance, under the Pen Name Andrew Macdonald. He also wrote Hunter under the same pen name and scripted The Saga of White Will under his real name.

The story was first released in serial form in the National Alliance's monthly publication Attack! between 1975 and 1978, before being collected into a book in 1978, and has since been mostly sold across the US through mail-orders in gun magazines, gunshow circuits, under the counter in various gunstores, and at far-right political meetings and conventions. It has since become infamous for inspiring numerous hate crimes and acts of terrorism by white supremacists and other members of the militant far-right — not just in the US, but also internationally — including several murders, robberies, and bombings.

Arguably influenced the Northwest Front series of books, which is also a white nationalist revolution book.