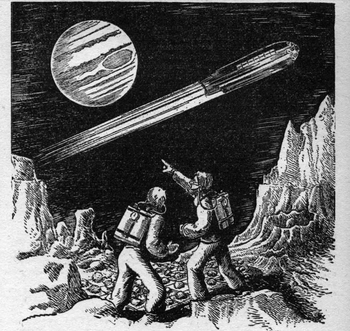 First published in Astounding Science Fiction (October 1941 issue), by Isaac Asimov, this Science Fiction Short Story is about Earth versus Jupiter, and the scientific race to build the best weapons.

Leo Birnam, the secretary of scientific affairs [sic], spends most of the story convincing Colonial Commissioner Nicholas Orloff of how serious the Jovian threat is to humanity. The square footage of Jupiter's surface means that the Jovians have fifty times the resources as Earth's empire.

Once Orloff is convinced of the danger, head scientist Prosser describes the difficulty in getting force fields strong enough to hold an atmosphere against the vacuum of space. This is the one bit of technology that they know will be possessed by the Jovians when they launch their war of extermination.

"Not Final!" provides examples of: