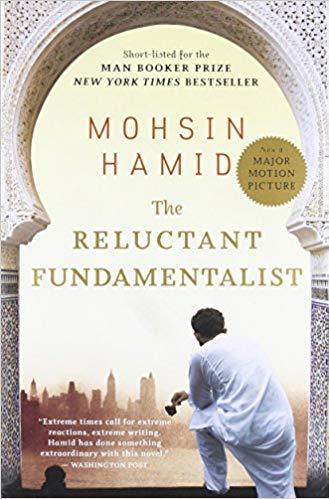 "I like Pakistanis. But the elite has raped the place well and good, right?...You guys have got a serious problem with fundamentalism."'
Advertisement:

"Excuse me sir, but may I be of assistance?"

A controversial and thought provoking 2007 novel by Mohsin Hamad.

Changez is living an immigrant's dream in America. At the top of his class at Princeton, he is snapped up by an elite, all-American firm. He lives on the energy and vibrancy of New York City and his budding romance with high class would-be novelist Erica - the complete opposite of his life back in Lahore, Pakistan, where his family is sinking back into poverty.

But in the wake of September 11, Changez finds his view of America, and America's view of him, have changed overnight. His loyalties are called into question, unearthing allegiances more fundamental than money, power, freedom or love.

It was adapted into a film directed by Mira Nair and starring Riz Ahmed, Kate Hudson, and Liev Schreiber in 2012.