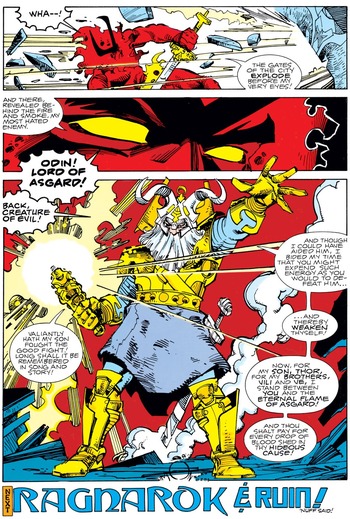 The dark fire will not avail you, Flame of Muspelheim! Go back to the Shadow! YOU! SHALL NOT! PASS!
The Surtur Saga was a 1984-1985 storyline of The Mighty Thor, written by Walt Simonson.

Thor had just lost the power to turn into the human Donald Blake, as that enchantment was transferred by Odin to Beta Ray Bill's hammer. He got a secret identity, and began his new life fighting against a dragon, with the help of the last viking. He was also seduced by Lorelei, the sister of the Enchantress who was acting as a mortal. In the meantime, Odin discovers that Surtur is working in the galaxy of fire, and investigates the details. He sends Balder to recruit Loki for the upcoming battle, but Loki has already allied himself with Malekith, a lieutenant of Surtur. Malekith seeks the Casket of Ancient Winters, kept by the Willis family for centuries, and Thor and Eric Willis cannot prevent its destruction, which unleashes an ice age on earth.

When this ice age begins, Surtur heads to Earth, to search the Bifrost and get to Asgard. Odin knows that Surtur wants to retrieve the Eternal Flame, to burn his sword and destroy the universe. With his demons holding the superheroes and the main forces of Asgard on Earth, Surtur gets to the gates of Asgard. He defeats Heimdall and Thor, and finally Odin himself by attacking him with the full force of the Ancient Winters. But Loki betrays Malekith, and joins the war against Surtur. Even more, Eric Willis manages to reforge the Casket of Ancient Winters, trapping them again inside it... and, without knowing it, he frees Odin, who returns to the fight. Odin, Thor and Loki fight together against Surtur, and finally both Odin and Surtur fall into an abyss that engulfs them.

The Surtur Saga contains examples of: