Have You Come to Gloat? 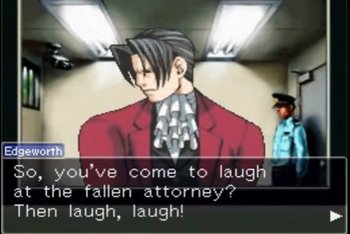 Miles Edgeworth is having a rough Christmas.
"Thor. After all this time, and now you come to visit me. Why? Have you come to gloat? To mock?"
— Loki, Thor: The Dark World
Advertisement:

When someone is captured, and then one of the captors goes to visit the captive. The captive expects the captor to make with some Evil Gloating. A common thread is the one down on their luck making sarcastic remarks about their fall from grace that put them in such a situation ("Oh, it's you. So you've come to see the 'Great ___' and scoff at his hour of despair!") as an attempt to deflect the incoming chiding. But usually, if it's shown, then he hasn't come to gloat, and it's just Exposition. Sometimes he gloats anyway, though.

Not limited to captures, either - it can be spoken any time when there are two longtime rivals and one of them suffers a misfortune. Often used when a Sore Loser, a mistrusting or prideful character gets A Taste of Defeat and genuinely underestimates how much of a Nice Guy their rival is.

See also Don't You Dare Pity Me! if the loser doesn't want others to be nice to them.