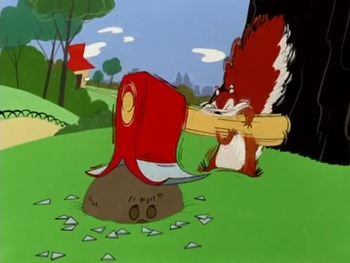 That is literally one tough nut to crack.
Advertisement:

Surprisingly Super-Tough Thing is when an inanimate object, building, or vehicle is attacked with futility, even though the attackers expect it to be outright destroyed.

However, the futility of the attack has nothing to do with the actual vulnerability of the object. The object can even be a vase made of paper thin glass; all things being relative, what's Made of Indestructium to an ant is Made of Plasticine to a human. The key word here is "surprisingly": this trope isn't about objects that are indestructible, it's about objects that are surprisingly so to an attacker who expects their destruction (or at least destruction from their initial attacks. If they change their weapon or adjust their technique which succeeds in destroying the object, then their failed first try still counts toward this trope).

Interestingly, this trope is omnipresent in video games. Since every object that doesn't have a damage model coded for it is effectively invincible barring exploitation of glitches, many players invoke this trope when using their weapons on random things lying on the ground instead of enemies.

Be aware that when adding examples, be sure that:

Regardless of the quality of their judgement, if the character in question believes they can harm or destroy the object in question, requirement 2 is fulfilled. Even if omnipotent gods have failed to destroy the MacGuffin, if Average Joe is stupid, arrogant, mentally ill, or intoxicated enough to think his mortal punches will crush it, then it counts.

For things that really are indestructible, and not those that just seem that way, check out Made of Indestructium. If a character's most powerful attack or weapon invokes this trope, it can overlap with The Worf Barrage. Compare No-Sell, which is more about characters fighting each other than failing to destroy inanimate items. Toys that are Made of Indestructium may invoke this trope in real life.

The last panel has Gaston's hand in a cast and Fantasio wondering at the Indestructible Edible.

Films — Live-Action
Literature
Live-Action TV
Tabletop Games
Video Games
Since, as stated above, everything in a video game that doesn't have a damage model is invincible from the player's point of view, and there is at least one object in almost every video game that will invoke this trope on a destruction happy player, a list of straight examples would be too long to list. Please focus on aversions, inversions, subversions, lampshade hangings, and parodies.
Webcomics
Western Animation
Real Life

Despite the pep talk setback, the Tigers went on to win the game 10-7.