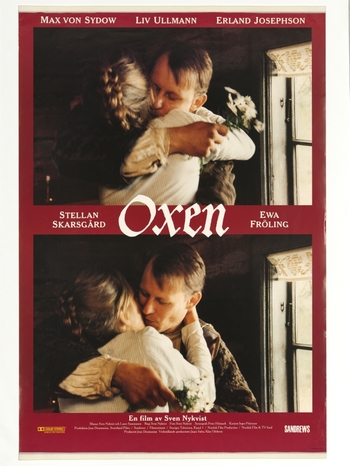 The Ox is a 1991 film from Sweden directed by Sven Nyqvist.

Sweden, winter 1867-68. Life is so bad in a particular province, due to two years of poor harvests, that the people are starving and the province is emptying out as residents emigrate to America. Helge Roos (Stellan Skarsgård) has a young wife, Elfrida, and an infant daughter, Anna, and they're all hungry. One day, in desperation, he kills and slaughters local rich man Svenning Gustafsson's ox.

Helge hides the meat, and his family survives the winter. But he's riven with guilt, and when the local vicar (Max von Sydow) catches him with the hide, Helge is relieved. He is shocked, however, when he goes to court and learns the severity of his punishment.

One of only five films directed by Sven Nyqvist, a world-famous cinematographer best remembered as the cinematographer for many of Ingmar Bergman's movies. Liv Ullmann appears as Maria, Svenning's wife.